On 18.07.22 started my long-awaited adventure with the bike.

Things got off to a bumpy start, but as the saying goes: good things come to those who wait!

On Sunday, 17.08, it was then with my girlfriend’s camper and the bike in tow towards Frankfurt. So we could drive relaxed to Frankfurt, spend the night near the airport and go to the airport the next morning in peace. In the evening we met my parents and my brother, who were on a city trip through Germany, and had a final dinner.

The next morning I started pretty early with the feeling of stage fright and thoughts like: Do you really want to do this, or isn’t this a bit too big for you … were going through my head.

I was all the more relieved that the film team arrived early and final interviews with Susanne and me were recorded. So I was distracted from my stage fright, doubts and fears.

At the airport it was incredibly turbulent and enormously difficult to find a suitable parking space for the motor home. It was all the nicer that Susanne and I had time to say goodbye to each other in spite of the hustle and bustle. Tears were shed, I can tell you that much. You can possibly see the details in the documentary.

After Susanne left for home, the film crew accompanied me to check in the bulky luggage, which was to become extremely important later in the trip.

From the window in the boarding lobby, I could watch the airplane crew and the pilot as they helped to stow the suitcases in the hold of the plane. Unfortunately, as I found out later, my bicycle was not on board. With a decent delay, the plane took off for an 11-hour flight to Vancouver. As soon as I sat on the plane, the stage fright completely disappeared and turned into the feeling of childlike joy.

On the plane I sat next to Max (Maxim from Kiev), who currently lives with his family in Germany and had a business appointment in Vancouver. Very quickly, a great connection with great conversations developed, so that the flight flew by ;-). In Vancouver our ways then separated, as I went towards bulky luggage to check it again later for my connecting flight to Calgary. At the bulky luggage counter came then the shock. After waiting for an hour, I was sobered to discover that my bike had not arrived. The airport staff there first put me off that the bike would certainly arrive with the next plane and I should not miss my connecting flight to Calgary.

Somewhat disappointed, but still in a positive mood, I took the connecting flight to Calgary to spend the first two nights in the pre-booked Air B’n’B accommodation. In the first days I spent a lot of time at the airport in Calgary looking for my bike. Unfortunately without success. No one could tell me where my bike was at this point.

During these days I was in constant contact with the producer of the film team, my mother as well as my girlfriend, who tried on different levels to get news about the whereabouts of my bike. My parents even shortened their round trip through Germany in order to find out personally at the Frankfurt airport what had happened to my bike. Extremely sobering was that they received after hours of drilling and unpleasant questions from Condor the information that due to the staff shortage so much bulky luggage would remain lying that in the meantime a hall was rented to store the thousands of pieces of luggage temporarily. According to Condor, I should be prepared that the bike could not be delivered before 3-4 months or even around Christmas time. Extremely disillusioned and frustrated with this information, I didn’t know what to do at first since my adventure was related to my bike and in the bike box was also all my camping and movie equipment. On top of that, Canada is incredibly expensive and the Air B’n’B was $80 a night (super cheap by Canadian standards).

The thought of spending too much money for weeks on accommodations and food and not knowing when and if the bike would eventually arrive was absolutely paralyzing. It was even more frustrating the next day when Susanne took several detours through acquaintances and their friends to get to a senior airport official in Frankfurt, who firmly assured her that the bike would have to be at the airport in Vancouver. He said that if he were me, he would immediately get on the next plane to Vancouver to look for the bike there.

Now there were two statements of the firm conviction that the bike is either stored in Frankfurt in a huge hall with thousands of other bulky luggage or that the bike was left at the airport in Vancouver without an owner. 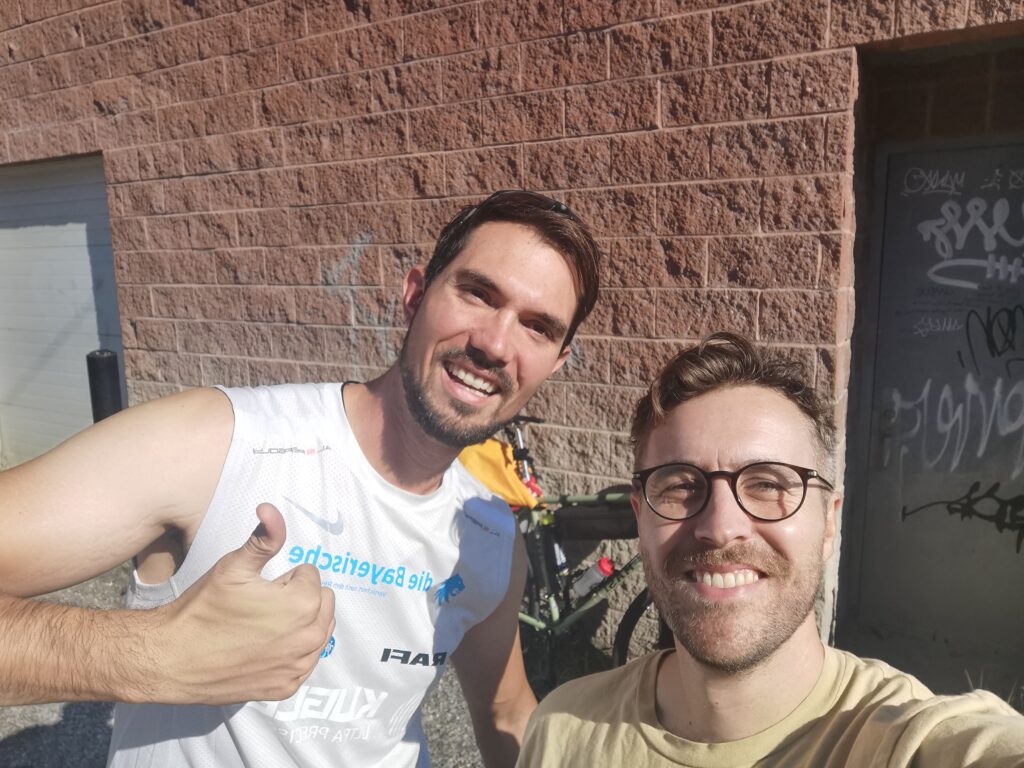 Eric my Host in CalgaryInstead of flying to Vancouver, after my third night at Air B’n’B I decided to leave the accommodation and go to Eric’s place in Inglewood, an old part of Calgary near downtown, dominated by artists, small stores as well as quaint bars. I met Eric the night before through Warmshowers, a bike travel community, and he offered me to stay with him for a few days. The next morning we met at a coffee shop, he showed me his apartment and told me he was going camping with his girlfriend for the weekend and I could have the place to myself. Despite the bad news the day before, I was so happy that now the problem with the high accommodation costs had been solved and I could now go on the further search for my bike without this pressure.

Without knowing exactly which of the information was true, the days passed in Calgary. Since the likelihood of getting my bike within the next few days was extremely low, I decided to go to the press to ask for help and gain attention for Brain Tumor Relief Canada. The very next morning I received an email from the newspaper editors of the Calgary Herald that they found my story very inspiring and would be very happy to support me with an interview regarding the bicycle. Already in the afternoon I met for the interview and a following photo shoot. What I found incredibly great was that the article could be read the very next day in the online edition of the Calgary Herald and the Calgary Sun.

At the same time, the producer of the documentary in Germany contacted Frankfurt Airport and Condor to find out which of the statements were true.

During this time, a lot of different people contacted me, offering their help, encouraging me and cheering me on. For example, a pilot who became aware of me via the Ravensburg hospital’s social media site. 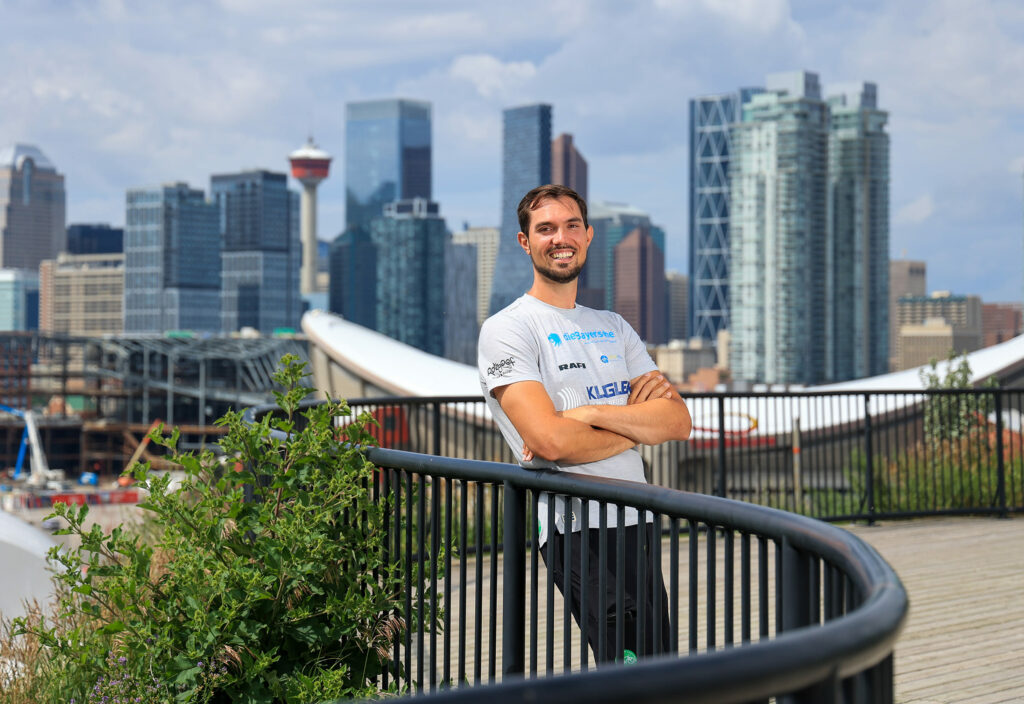 The backdrop of Calgary in the backgroundOne day after the newspaper article was published in Calgary, the Canadian Brain Tumor Support and also the local radio station CBC contacted me and supported me with further reports as well as interviews. Slowly the ball started rolling and also in Germany the local media reported about my bike loss.

The thought of buying a bike and all the equipment from scratch crossed my mind frequently, but was hardly conceivable for me, because I didn’t want to spend a large part of my travel budget right at the beginning of my tour. The idea of a friend that I could also cover the first kilometers of my tour on foot à la Forest Gump with a handcart was very attractive at first. I didn’t want to have to just sit around and wait, I wanted to get on the tour. After I had inquired in several stores about possible companions, it was quickly clear to me that a proper pull cart hardly differs in price from a bicycle, but is much more difficult to procure.

With the help of media support and the efforts of the film producer, Condor’s management soon got involved, deeply regretting the loss of the luggage and now taking care of finding the bike themselves. The very next day came the information that the tracking number had changed in an incomprehensible way and because of this no tracking of the bulky luggage was possible, but that they would now take care of finding it as soon as possible. In addition, they apologized to me very sincerely and assured me that they want to support me as best as they can, so that I can carry out my project.

At the same time, several people from Calgary who had heard about me through the media there contacted me and told me that there was a second-hand outdoor store near Eric’s apartment that would definitely support me. Through the outdoor store, I was then referred to a second-hand bike store (Two Wheels View). Fortunately, they had a touring bike in my size available and were willing to give me a very good discount, thus supporting me.

Also my German sponsor “Die Bayerische” supported me with the purchase of the spare bike, so after now 14 days of waiting I could finally start on my big tour.

In the meantime Condor assured me to bring my bike, which was found in Germany in the meantime, to Vancouver within the next 14 days and to take over the costs for the replacement equipment. After all these hardships, I could finally start my adventure true to my motto: And still.

I was so happy to finally leave and not be stuck in Calgary anymore, but at the same time made great memories from those 2 weeks and a new friendship with Eric.

This is how it goes on…. 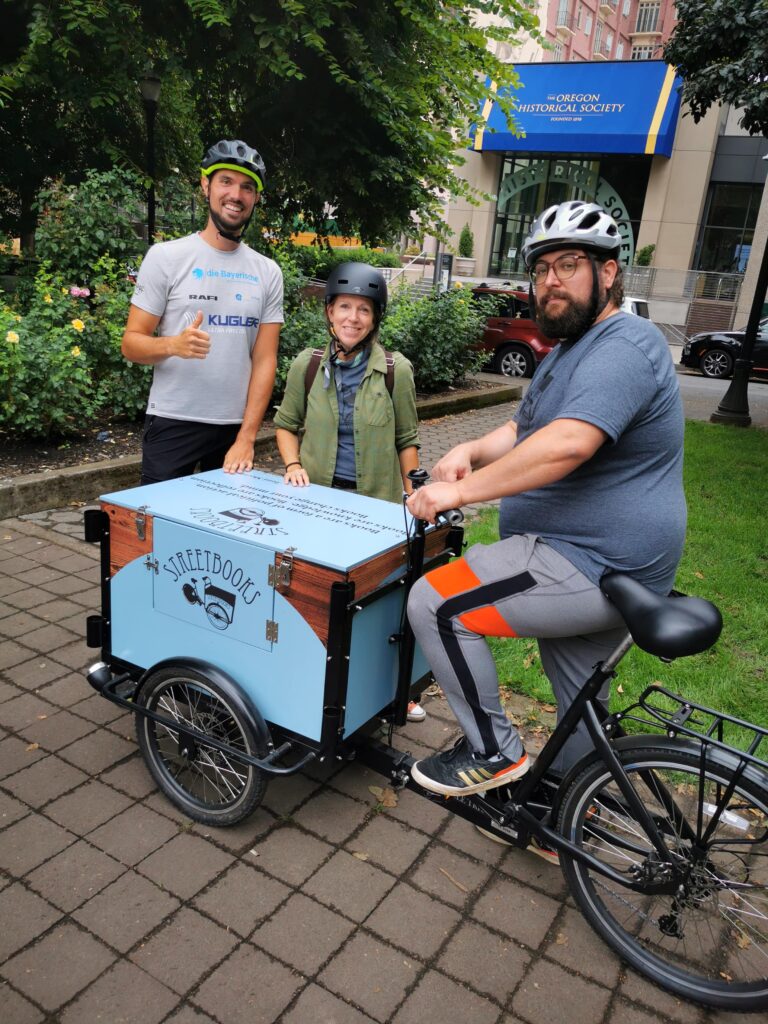 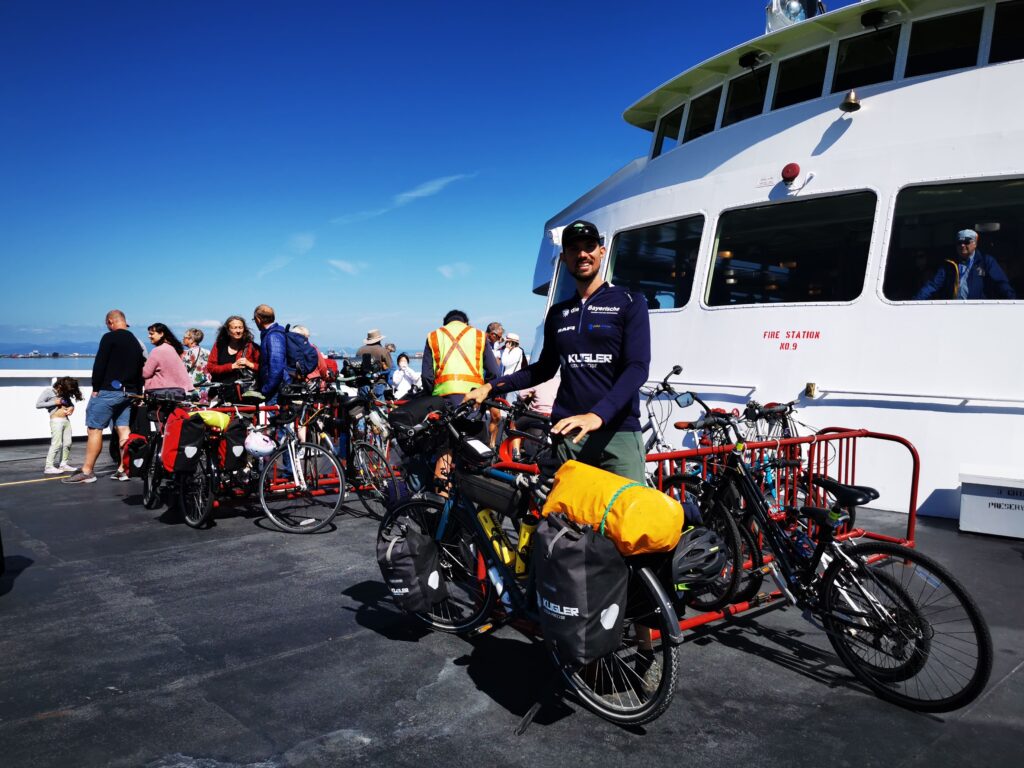